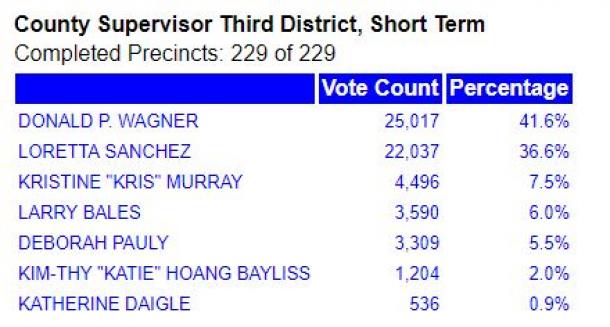 Indeed, after sweeping all of the Congressional seats, several pivotal State Legislative seats and one Supervisor seat – Doug Chaffee was the first Dem to win a County seat in over a decade – Democrats were feeling the momentum with former Congresswoman Loretta Sanchez. She was the lone Democrat facing six Republicans, including Irvine Mayor Don Wagner, former Anaheim Councilwoman Kris Murray (termed out last year) and former Villa Park councilwoman Deborah Pauly.

As of Wednesday morning, however, Wagner holds a 5 point (about 3,000 vote) lead on Sanchez. His margin actually grew in the final report Tuesday night -- and he’ll need the cushion to hang on. There are still at least 9,000 ballots left to count, plus any late arriving mail ballots. All told there could be as much as 15-18% of the votes still out there.

If history is a guide, these will break heavily for the Democrat in the race. Recall Gil Cisneros was down by 5 points on election night last November. By January he was a congressman.

Specials in Orange County also have a history of being squeakers. Remember when Janet Nguyen beat Trung Nguyen by 7 (out of 50,000) votes in 2007, or when Andrew Do beat Lou Correa by 43 votes in 2015? Buckle Up!

This is an incredibly pivotal election. The impact of Loretta securing this seat would set the stage for a potential Democratic majority on the OC Board as soon as next year. District 1 Supervisor Andrew Do, represents the most left leaning district of the County and won his last race by just 6 points.

As for the 3rd District, itincludes Irvine, Orange, Tustin, Anaheim Hills, Villa Park, Yorba Linda and a good chunk of unincorporated Orange County in that neck of the woods. Spitzer was first elected to the District in 1996, and at 35, he was the youngest elected county supervisor in 75 years. In 2002, Spitzer moved into the 71st District in the State Assembly, and then returned to the OC Board in 2012.

Don Wagner narrowly won the Republican primary election for the 70th Assembly District over Irvine City Councilman Steven Choi (and then-Tustin Mayor Jerry Amante, who finished third), and later won the general. Wagner won the Irvine Mayor’s race in 2016. If he hangs on to the Supe seat this week, that will trigger a Special Election in Irvine this Summer.

A Wagner win would maintain a strong Conservative in the 3rd District seat, arguably he would be the most conservative on the Board along with Michelle Steel.